JAMES CARROLL IN The New Yorker

Who Am I to Judge?
A Friendship That Ended the War
The Silence
War Inside the Pentagon
The Saint and the Holocaust
House of War
Out Loud: Humility From On High
What to Make of Pope Francis Now?
Pope Francis After America
Pope Francis & The Renunciation of Jewish Conversion
With His New Book, Pope Francis Unlocks the Door
Pope Francis & Donald Trump
The New Morality of Pope Francis
Daniel Berrigan, My Dangerous Friend
The Moral Weakness of Pope Benedict’s "Last Testament"
Pope Francis Is the Anti-Trump
What Donald Trump Doesn’t Understand About Anti-Semitism
Pope Francis Proposes a Cure for Populism
Two Scenes from Pope Francis's Revolution of Tenderness
The Renewed Importance of Pope Francis's Encyclical on Climate Change
Pope Francis's New Man in Newark
The True Nature of John McCain's Heroism
The Pope's Shrink and Catholicism's Uneasy Relationship with Freud
What Puerto Rico Needs After Hurricane Maria
The Death of Cardinal Bernard Law and the Legacy of Clergy Sex Abuse
The Transformative Promise of Pope Francis, Five Years On
What the Bible Really Says About Trump’s Zero-Tolerance Immigration Policy
Pope Francis and the Problematic Sainthood Cause of Cardinal August Hlond
After Pennsylvania, What Pope Francis Should Say in Ireland
In Summoning the Bishops to Address the Sexual-Abuse Crisis, Is Pope Francis Again Missing the Point?
Can Elizabeth Warren and Adam Smith, Defying Trump, Persuade Americans to Get Serious About Nuclear Arms Control?
Why Ed Markey, Co-Sponsor of the Green New Deal, May Be Hopeful for its Chances
Lessons To Be Learned From The Afghanistan Papers 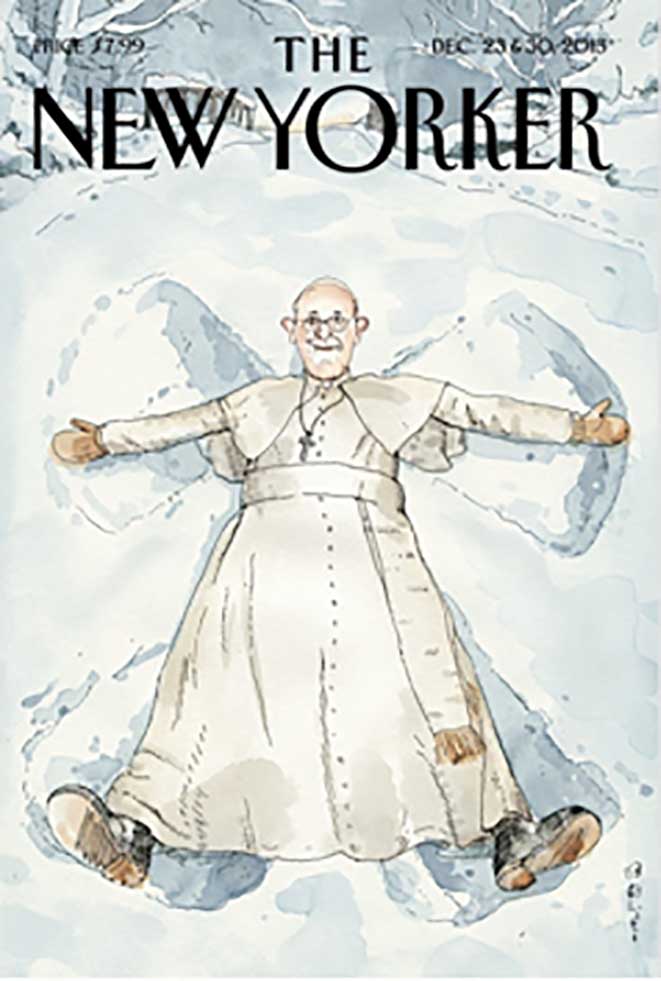 Who Am I to Judge?

In a series of interviews and speeches in the first few months after his election, in March, Pope Francis unilaterally declared a kind of truce in the culture wars that have divided the Vatican and much of the world. Repeatedly, he argued that the Catholic Church’s purpose was more to proclaim God’s merciful love for all people than to condemn sinners for having fallen short of strictures, especially those having to do with gender and sexual orientation. His break from his immediate predecessors is less ideological than intuitive, an inclusive vision of the Church centered on an identification with the poor.

What to Make of Pope Francis Now?

With His New Book, Pope Francis Unlocks the Door

The New Morality of Pope Francis

Pope Francis Is the Anti-Trump

The Renewed Importance of Pope Francis's Encyclical on Climate Change

The Pope's Shrink and Catholicism's Uneasy Relationship with Freud

The Transformative Promise of Pope Francis, Five Years On

Pope Francis and the Problematic Sainthood Cause of Cardinal August Hlond

Roman Catholic canonization is always as much about the present as about the past. So why would the Church elevate Hlond as a moral exemplar today?

After Pennsylvania, What Pope Francis Should Say in Ireland

In Summoning the Bishops to Address the Sexual-Abuse Crisis, Is Pope Francis Again Missing the Point?

A Friendship That Ended the War

War Inside the Pentagon

A REPORTER AT LARGE about Secretary of Defense William S. Cohen... He assumed the post in January. Writer met with him in his office, on the third floor of the Pentagon. It is an austere room by any standard except the Pentagon's--a shoebox, with a low, flat ceiling. The…

The Saint and the Holocaust

ANNALS OF RELIGION about the canonization of Edith Stein... Stein was a Carmelite nun who was snatched from a monastery in 1942 by the Gestapo... She was born a Jew in 1891 in Breslau, Silesia, which was then under German control but is now part of Poland... Tells about her…

Out Loud: Humility From On High

James Carroll and Joan Acocella discuss Pope Francis; Roger Angell talks about his award from the Baseball Hall of Fame.

I was a twenty-two-year-old seminarian in 1965, struggling to imagine myself in what already seemed the impossible life of the Catholic priest, when I came upon the writing of Daniel Berrigan, a Jesuit poet. Berrigan, who died on Saturday at the age of ninety-four, quickly came to embody for me a new ideal. He testified, in his expansive life, to language itself as an opening to transcendence. What was Creation if not the Word of God, and what were human words if not sacraments of God’s real presence? Writing could be an act of worship. The idea defines me still.

In 1968, less than a year after his Navy bomber was shot down, the imprisoned McCain was abruptly offered unconditional release by the North Vietnamese, perhaps because his father had just been named the commander of U.S. forces in the Pacific. McCain was still badly crippled from his crash and the poor medical treatment that followed, yet he adhered to the P.O.W. code of honor and refused to be repatriated ahead of American prisoners who had been in captivity longer than he.

Not long after the great hurricane cut across Puerto Rico, overwhelming the island with hundred-and-forty-mile-an-hour winds and a summer’s worth of rain in two days, the Times ran an article headlined “What Puerto Rico Needs.” In testimony before a committee of the U.S. House of Representatives, the paper reported, the territory’s governor had described the aftermath of the storm with pessimism: “The people were discouraged. They lacked the Anglo-Saxon energy to face a gloomy outlook.” For the half a million Puerto Ricans “prostrated by the hurricane,” another correspondent wrote, “paternalism will be not only not misplaced here, but it is almost necessary.” The island’s residents, especially its poor, had been deprived of their homes, their crops, and their livelihoods. As a headline from late September put it, “Many Peons Are Starving.”

Banished from Boston and protected in Rome, Law became a symbol of the Catholic hierarchy’s failure to reckon with its crimes—a failure that continues today.

Why Ed Markey, Co-Sponsor of the Green New Deal, May Be Hopeful for its Chances

Lessons To Be Learned From The Afghanistan Papers