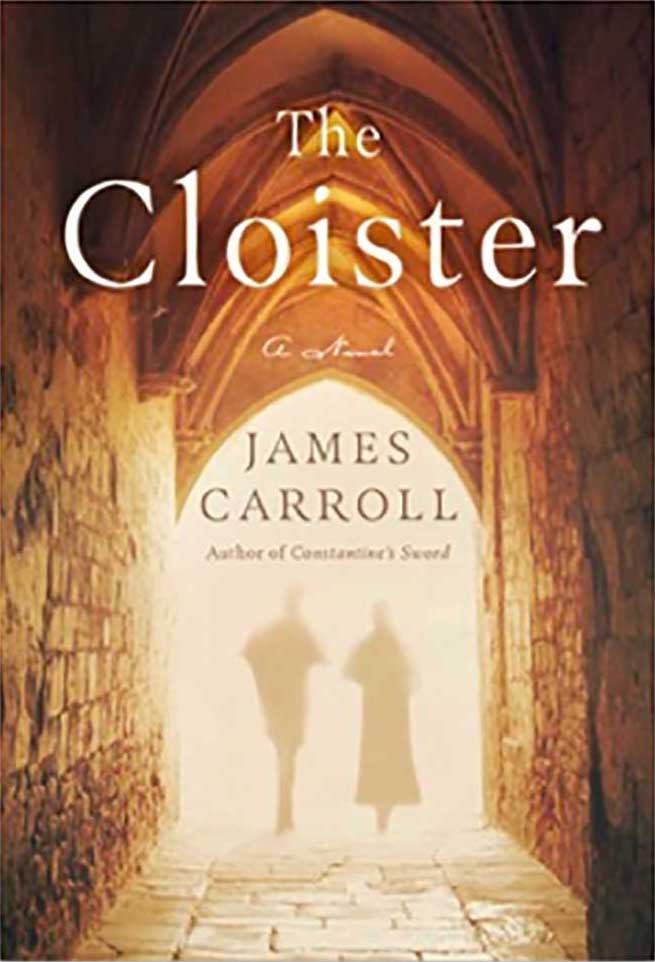 “A sweeping, beautifully crafted book — perhaps his best yet.”

When Father Michael Kavanaugh, a priest from a nearby parish, takes accidental refuge in The Cloisters, the Metropolitan Museum’s monastery-like center for medieval art, he encounters a mysterious French museum docent, Rachel Vedette. Both of them harbor troubling personal histories and, sensing a kindred spirit in Michael, Rachel slowly divulges hers. Her late father, Saul, was a Sorbonne professor engaged in an unlikely study of the great twelfth-century French Catholic thinker Peter Abelard, progenitor of the Sorbonne itself. With Rachel’s help as fellow researcher, Saul had revealed an Abelard whose positive regard for Jews and Judaism was as profound as it was forbidden. But the German occupation of Paris had begun, and with the Nazis closing in, this new interpretation placed Saul and his daughter in grave jeopardy.

Braided together with this twentieth-century drama is the Medieval story Saul uncovered. Abelard came to his rare magnanimity when he fell in love with his most brilliant pupil, the passionate and principled young noblewoman, Heloise. He became the most provocative thinker in Europe, and she its greatest Abbess. The first moderns, they stood alone together at a great fork in the road of history, when Christendom took the wrong turn that led ultimately to the Holocaust.

As Rachel finds solace in The Cloisters after the horrors of Paris, her surprising new friendship with the sincere young priest provides an unexpected lens through which to view the epic of Abelard and Heloise, offering a path to recovery. Kavanaugh, too, gains new perspective and glimpses the life he might have had outside the Church. Spanning centuries and continents, The Cloister is the compelling story of four characters ahead of their time, questioning faith, identity, and love against the backdrop of historical upheaval.

REVIEWS FOR The Cloister

"Not many books about New York begin in the 12th century, but James Carroll’s latest novel, “The Cloister,” plausibly links the indelible 900-year-old love affair between Abélard and Héloïse to a chance encounter in Washington Heights between a conflicted parish priest and a Jewish refugee from Nazi-occupied Europe...Their awkward convergence becomes an incandescent, allegorical outgrowth of the agonizing introspection that Abélard and Héloïse undergo in their search for self-awareness." Read Full Review

In "The Cloister," Mr. Carroll, the author of "Warburg in Rome" (2014) and other novels, as well as "Constantine's Sword: The Church and the Jews, a History" (2001), has produced a sweeping, beautifully crafted book—perhaps his best yet—that draws readers into the inner sanctum of Christianity, with its shameful contradictions but also its enduring possibilities. He conveys a vital lesson about religiously inspired violence and the prospect for peace but avoids being heavy-handed, instead toggling lightly between two fraught moments in history. He weaves together a complex story of spiritual traditions and their lasting political legacies. Read Full Review

“A priest wracked with doubt is familiar territory for Carroll. He was ordained in 1969 and served as the Catholic chaplain at Boston University until 1974, when his anti-war sentiment and ambitions as a writer increasingly placed him at odds with the Church. His career has been prolific and diverse. After a dozen novels and eight works of nonfiction, including his National Book Award–winning memoir, he is in subject and sense one of our most consistently Catholic writers — with his focus often on the life and inspiration of Jesus, placed against ecclesiastical fallings.” Read Full Review

The Cloister named a best book of March.

Fascinating in its evocation of the twelfth-century Catholic Church in France, this lavishly detailed historical novel serves as an education in historical philosophy, a poignant tale of devoted love, and a portrait of a postwar human crisis influenced heavily by both. Carroll, prolific author of both fiction (Warburg in Rome, 2014) and nonfiction (An American Requiem, 1996), relates the story of Abelard and Héloïse alongside the modern portrait of a WWII-era priest and a Jewish Holocaust survivor, who also seek a logical, believable God and hope to assuage their own guilt. This is definitely a thought-provoking book. A heavy emphasis on description and philosophical debate slows the pace some, but those who relish historical fiction with a strong intellectual underpinning—Iain Pears’ The Dream of Scipio (2002), for example, which also juggle different stories across multiple time periods—will be right at home here.

“Every so often I hunger to read a novel of ideas and The Cloister is that and more. We are taken into the world of Paris in the 1140s; the world of Abelard and Heloise— the world of their retreat from the large world around them… I actually read all 364 pages in one sitting.”

“On the North west shore of Manhattan sits an imposing collection of medieval cloisters imported from France. In the 1950s a young Catholic priest wanders into this serene space and meets Rachael, a Parisian Holocaust survivor. Tentatively yet bravely, she introduces him to the work of medieval scholar Peter Abelard and unwittingly pushes him to a crisis of faith. Their story is interwoven with that of Abelard and Heloise themselves. The reader is immersed in love stores large and small, tales of great courage and the contemplation of Church crimes both ancient and modern. Carroll has written a deeply moving immersive story on the nature of evil, the corruption of power and how love, faith and pursuit of knowledge are the flames of hope in the darkness.”

"James Carroll’s ‘The Cloister’ explores the double-edge sword of religion and love...a hauntingly beautiful triptych of a novel."

“Of faith, doubt, and sorrow: Carroll (Warburg in Rome, 2014, etc.) delivers another religiously charged novel, and a fine one at that. Former priest Carroll blends his well-aired interests in history, theology, and literary fiction in this deftly told story that partakes richly of all. He opens with a familiar but entirely appropriate episode in church history and, as it happens, one of the world's great love stories: the doomed affair of Abelard and Heloïse, a story that Carroll complicates with a part that is less well known than Abelard's mutilation and Heloïse's cloistering, namely Abelard's defense of the Jews of Mainz. "Jews be damned," thunders an inquisitory abbot. "The battle now is for Peter's eternal salvation." Fast-forward to New York 800 years later, when a conflicted priest from a working-class parish decides to duck into a place not often visited by most working-class Catholics of Inwood, the Cloisters, its architectural elements "tastefully reassembled to evoke the high romance of Gothic revival that had so quickened the patrician imagination of the Gilded Age." There, Michael Kavanagh meets Rachel Vedette, an alluring docent who is whip-smart, deep in reflection on the apostate Simone Weil, and harboring a few secrets of her own having to do with the intersection of and conflicts between the Jewish and Christian worlds. As Rachel slowly unveils her story, Michael comes into conflict himself with the inquisitory Catholic hierarchy—and not just over intellectual matters and questions of faith. As he and Rachel recapitulate elements of that foundational Abelard and Heloïse tale, always close to the possibility of tragedy, Carroll brings in a range of issues: the place of excommunicants in a supposedly forgiving church ("In our day," one sagely remarks, "Abelard's misfortunes wouldn't have qualified as a priest's spiritual reading"), the trauma and terror of priestly sexual abuse, the soul-shattering Holocaust that has so recently ended. You don't have to be Catholic—or Jewish, for that matter—to appreciate Carroll's story, though it probably helps. A rich, literate tale well told.”

"With his familiar deftness and depth, James Carroll weaves a profound and compelling novel from diverse but overlapping narrative strands. From the conversations between a Catholic priest and a French Jewish woman in mid-twentieth century New York to the brutality of Nazi-occupied Paris, to the great medieval love story of Abelard and Heloïse, The Cloister illuminates life's most vital questions, and proposes inspiring, radical, and timely answers."

"James Carroll has written an enlightening, vitally important book, a necessity for our time.”

- MAXINE HONG KINGSTON, author of I Love a Broad Margin to My Life

“I didn’t know I needed this novel until I read it. As unflinching about the Holocaust as it is about the Crusades, The Cloister is a fearless exploration of the violent foundations on which our own historical inheritance rests. And like all the best fiction, it commandeers the reader’s heart.”

- RACHEL KADISH, author of The Weight of Ink

“James Carroll is an elegiac artist, a writer of great inclusiveness and tender sensibility. He invariably endows his subjects with deep humanity and understanding. And here, in his new look at the tragic story of Abelard and Heloise, he gives this medieval love affair a truly contemporary relevance.”

“This is a wonderful novel, and it’s wonder-filled. James Carroll brings the twelfth-century lovers Abelard and Héloïse blazingly back to life, and he does so through the medium of a New York priest and a Parisian Jew. The present and the past illuminate each other, and the startling mysteries of prejudice, brutality, and love are made doubly vivid here. Like All the Light We Cannot See, The Cloister is a book of gravity and consequence that makes you need to turn and turn the page.”